Book Review: “You Have To Live Hard To Be Hard” by Dan Laguna 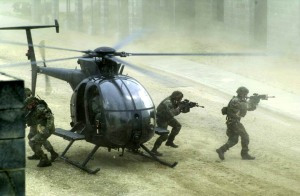 A 'Little Bird' helicopter, from the 160th SOAR.

﻿It’s funny how things work out.  A couple of years ago, while I was deployed to Iraq, I wrote an article for U.S. Cavalry’s On Point website, under the nom de plume, ‘SGT Roy Batty’.  It was called “The Rock Stars of Baghdad”, and was about Blackwater’s helicopter unit that was stationed nearby in the Green Zone.  I was at a tiny base just across the river called FOB Shield, nestled inside the Iraqi Ministry of the Interior compound.  Blackwater flew little Hughes Defender 500 helicopters to scout out the routes for their diplomat security teams, and we were fortunate enough to see them often.  We called the helicopter’s “Little Birds”, after very similar helicopters that were flown by the 160th Special Operations Aviation Regiment, or SOAR, in support of Special Forces units all around the world.  We knew that many Special Forces members went on to work for Blackwater after they had retired from the military, and given the extraordinary way that the Blackwater Little Birds were flown, we suspected that some of the 160th SOAR pilots were flying the helicopters that buzzed us almost daily.

And what flying it was!  I’ve never seen helicopters fly that way, before or since, and neither have you—unless you are a Green Beret or one of the few lucky enough to see Blackwater in action.  They would appear on top of us, as if magically summoned, a black flash and a scream of an engine, literally at tree top level and flying incredibly fast.  And the maneuvers!  Jinking left and right, and then climbing into an impossible vertical hammer head, only to wheel about and race back down,  pulling out at the last second—and all the while with men standing outside of the cockpit, scanning with machine guns for any sign of insurgents.  As I wrote in my piece, “you can’t help but feel like you are in a really good action movie every time you see these guys, and how could you lose when you have guys and toys as cool as these on your team?”

Fast forward three years.   Andrew Lubin, one of the editors from the now-shuttered  ‘On Point’ website, forwarded an email to me from Deonna Laguma.  She said that she was involved in writing a book about the Blackwater Little Birds, and wanted to know if she could include my article in it.  I didn’t know much else about her, but I certainly remembered the élan and esprit de corps of the Blackwater pilots, and I felt honored that she would think of my old article.  I immediately wrote back to her, enthusiastically saying yes, and then…..nothing.  Time went by, and I forgot about the interaction.

Last week, I got a book in the mail.  I opened up it up, and found a hardcover edition of “You Have to Live Hard to Be Hard:  One Man’s Life in Special Operations” by Dan Laguna, with Michael S. Wren.  And there on the cover, in full color, was one of Blackwater’s Little Birds, with what I initially thought was the Iraqi MOI behind it.  Talk about bringing back some memories!  I eventually figured out it wasn’t the MOI, but one of the buildings on the Green Zone, right next to Blackwater’s home, LZ Washington. There was no mistaking the Little Bird, though.  Looking at it, I could almost hear the incredible scream of its engine in the distance, some ridiculous radio controlled toy on steroids.   I immediately tore open the book, and started reading it.

The book is a quick read, written in the straight forward, matter-of-fact style used by military authors like Tom Clancy, Dan Brown or Clive Cussler.  The book starts off almost right away with an account of the worse day that Blackwater Aviation had to endure in Iraq: the shootdown of one of their Little Birds, and the killing of the crew by insurgents.  I had written about that day in my article, and I can still remember the absolute disbelief that my squadmates and I felt when we got the news.  To us, the Little Birds were bulletproof, invincible—untouchable in that action hero sort of way.  It was like hearing that Arnold Schwarzenegger got killed in one of his movies: it just didn’t happen.  Put it this way: I have no pictures of those helos, because they moved too fast to capture with a digital camera.  How could anyone ever shoot one down?

And that was where the book got personal.  First, it was written by Dan Laguna, the brother of the stricken helicopter’s pilot, Art Laguna.  Dan was there in Baghdad, also working for Blackwater’s Aviation unit, and was in the rescue mission.  It’s very rare that you get an account of a combat mission written by someone who was both there AND a family member, and seeing the events of that day through Dan’s eyes, as he searched in vain for his slain brother, was touching in a way that I did not expect.

The other thing that got me was the pictures.  No, not the black and white pictures in the middle of the book—the pictures that filled in the blanks of that military style writing.  Its one thing to read “Black Hawk Down” or some other war novel, and to have the narrative clip along in that dry “just the facts, ma’am” way, knowing nothing about the location or the people involved, and to recreate the action in some cerebral version of a movie theater.   It’s something else entirely to relive those events  with the sights and smells of a place that you spent an unpleasant year and some change in; places you know and remember vividly, even when you don’t want to.  Places that you’ve lost fellow Soldiers in, and what it felt like to have someone you know killed; instantly, brutally, and with that horrible sense of absolute finality.

There were a number of times that I just had to put the book down, and walk away.

Ultimately, the book was uplifting, in a real way.  A good segment of the book focuses on another helicopter crash; one that the author suffered through while in the 160th SOAR.  Dan recounts his recovery from severe burns and injuries in vivid detail.  To hear how this man fought back through incredible pain and suffering to return to Active Duty and to keep flying Special Ops was honestly moving to me.  It just drove home something I knew already—that it takes a special breed to go into Special Forces; a drive that surpasses certainly anything that I could muster.

That’s not to say that I didn’t have a minor gripe with the book.  I would have liked to see a lot more detail about Laguna’s time in Special Forces, and especially with the 160th.  Little is known about this highly classified unit and their missions, but, after all, the book’s subtitle is ‘One Man’s Life in Special Operations”, and there is precious little actually about Special Operations.  Now, I understand that Laguna is legally bound not to write about classified missions, but surely with some paraphrasing or changed names or timelines it would have been possible to include some of 160th’s incredible exploits.  Things like Operation Acid Gambit and the rescue of Kurt Muse from Modelo Prison in Panama by ‘Delta Force’ have been written about extensively by people like General Colin Powell, and clearly involved the 160th SOAR.   There’s any number of missions that are publically known to have been carried out by the 160th, spanning across 30 years and places like the Persian Gulf, North Africa, Kuwait, Iraq, Somalia, Syria, and Afghanistan, and it would have been awesome to get the personal perspective of the a pilot who surely was intimately familiar with those operations.

Still, the book is a great read, and an uplifting one.  More than just a recounting of experiences and technical details, it gives us a glimpse of what it takes to be a true Warrior—physically, spiritually, and emotionally.  It is a sad truth of today that less than 1% of the American public has a direct member of their family serving in the military.  It’s vital for a balanced society that we understand what our service members go through, respect what it takes to be a Warrior at the tip of the spear, and honor those who have gone in harm’s way while we sit, safe and ignorant of their sacrifices, back at home.

Dan and Art Laguna are those men.

That a few of my words would be included next to their struggles and achievements is beyond belief to me, and an incredible personal honor.  It just goes to show you:  it’s funny how things work out.